Minutes off the highway, centuries back in time

The White flakes in this image are bone fragments

Just a few miles off Interstate 15, if you look closely at the ground below, you can spot flakes of bone, all that remains of buffalo and other animals that were driven off the cliffs centuries ago.

A hike at First Peoples Buffalo Jump State Park outside Ulm, south of Great Falls, takes you right to the spot where the animals crashed down the cliffs to the spears and arrows of hunters below. Climb to the top, and you can walk along the flat, open, windswept area from which other hunters drove the buffalo off the cliff.

For those not up for a hike, the area is also accessible to vehicle traffic.

From the top, the expansive view of the Missouri River, with the Big Belts to the south (and that one massive butte that looks like it belongs in Arizona), is much the same as it was 1,000 years ago.

It is impossible to visit the park without gathering insights about the history and culture of the Plains Indians. A full-sized replication of a lodge (sometimes called a “teepee”) sits inside the visitors center with information about the tribes of Montana. Here, visitors interested in the local history get a glimpse of how people secured and dried their meat for the long winters and enjoyed some parts of the animal, like kidneys and other organs, on the spot.

“Interested people come from all over the world,” said park manager Rick Thompson. They range from tour groups following the Lewis and Clark Trail to folks just stopping by out of curiosity. Thompson has made a few small changes in recent years to improve visitor safety, such as mowing grass in some of the more heavily used areas near the visitor center to give snakes fewer places to hide.

For visitors interested in experiencing history, this is arguably the most profound and best-preserved animal jump site in the world. The top is crisscrossed by multiple drive routes, used to send the animals to their fate, and is unusual in its former use of “trip walls” to further flummox animals that weren’t on target for the big drop. The vast length of the jump and the expanse of spots that might have been used as launch zones are also unique and continue to contribute new archaeological knowledge — despite a lengthy period in which the bones at the bottom were mined and removed for their phosphate content.

First Peoples Buffalo Jump State Park is the perfect place to stop for a short adventure when traveling between Helena and Great Falls.

For those with more time to explore, Tower Rock State Park off Interstate 15 is also worth the trip.

Hikers ascending the rocky ridge that makes up Tower Rock State Park pass by a sign that signals the end of a maintained trail and warns of steep cliffs, loose rock and possibly rattlesnakes, but encourages hikers to keep going, if they dare.

And that is only about a mile from the parking lot, which is just seconds off Interstate 15.

There’s no sign on the highway to indicate the park exists. Pull off at the exit for Hardy Creek and you’ll find a parking lot next to a garbage transfer station.

Once in the park, there are signs to mark the spot where Lewis and Clark, as they reached the end of the prairies and began their journey into the mountains, sent a scout to the top of the spires to scope out the path of the Missouri. (The actual “Gates of the Mountains” area, with its spectacular limestone cliffs and scenic boat tour, is another 30 miles or so to the south.)

Scramble to the top of the ridge — or, for the extra-ambitious, to the very top of the rocky spires — for sweeping views of the river and the Interstate flowing in different routes around the steep wedges and pinnacles that make up the landscape.

However far you venture, you may well be the only group on the ridge, giving you a feeling of isolation even as cars and trucks speed below and the occasional boat drifts by on the Missouri. A deer bone, likely discarded by a mountain lion, proves that the area remains wild.

Tower Rock State Park offers a surprising amount of nature for an excursion that starts closer to the highway than most gas stations. Combined with First Peoples Buffalo Jump, it is also a lot of history without a long detour. It’s a rare opportunity to gather a sense of the surrounding area and explore landscapes traveled by Lewis and Clark and others for thousands of years before them.

The writer, Sanjay, re-enacting the classic “Lewis and Clark pose” 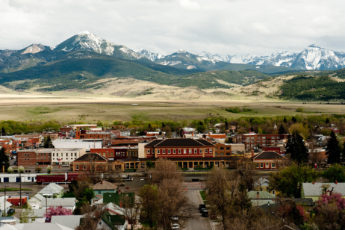