Grizzly Bears… I bet we’ve got your attention now. Despite all the noise surround grizzly bears, something has actually gotten done. 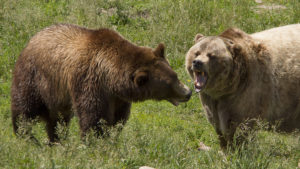 Bella and Brutus the bears. Photo by August Schield

This past year, grizzlies have been one of the hottest topics in Montana.

The population of grizzly bears surrounding Yellowstone National Park has been delisted from the Endangered Species Act, which has started many loud, emotional debates. Thankfully, many groups in Montana have stayed out of the firing line and focused on keeping campers, hikers, fishers, and even bears safe in bear county.

In the end, one of the simplest ways to keep both people and bears safe is to make sure bears don’t get a taste for human food. The old saying goes, “A fed bear is a dead bear.”

Most Montanans know how important food storage is when in bear country. But, when you’re trying to get the excited kids into their sleeping bags and make sure the fire’s properly out, trudging off into the woods to find a tree to hang up a bear bag seems very inconvenient.

Luckily, Greater Yellowstone Coalition and the U.S. Forest Service have quietly installed over 1,000 bear-proof storage containers in campgrounds throughout the region. So hold off on buying that $300 dollar bear-proof cooler! When Chris first started, he thought installing 20 bear boxes would be a big lift. However, if a difference were to be made, it needed to be at an ecosystem level.

The project didn’t always go smoothly. Greater Yellowstone Coalition was working with the Forest Service, so one year a forest would have the budget and the next year they wouldn’t. Thankfully working cooperatively with the forest service, along with some funding from Greater Yellowstone Coalition, allowed for this project to be nearing completion.

“People forget how this is really the front line of defense for co-existing with grizzly bears on the landscape,” Chris said.

Keeping bears away from human food is a simple technique, but it keeps bears alive in the far-out hills and humans safer because of it.

We’re glad that through all the noise, something is actually getting done. 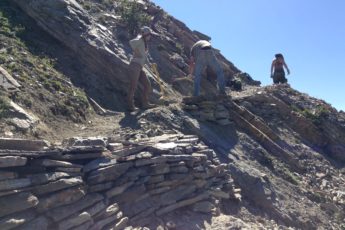 Before We Hit the Woods, Someone's Got to Maintain the Trails

« Previous post
Giant Springs: Fishing and Hiking and Picnics, OH MY!
Next post »
Wind Power is Blowing up Local Economies