The sweet smell of fresh air and fresh cut hay remain a rancher’s favorite smells. Windrows of hay down and bales churning out of baler are a rancher’s favorite sights — behind a new calf bucking around during spring calving. June, July and August remain prime time for haying season in Montana, so ranchers put in the extra time and effort to make hay now to prepare for next winter.

Every ranching operation has tweaked its haying system to benefit their land, equipment, budget and family circumstances. On our place north of Winnett in Central Montana, we are lucky enough to have irrigation water, so the season begins with irrigating the fields. I prefer not to irrigate in the dark — bugs flying in my nose and eyes, thinking that I hear rattle snakes, tripping over mounds of dirt – no thanks. Instead, I try to master the water flow so that I change sets at dark to run until daylight. We flood irrigate through gated pipe, which sends the water down the fields in between dikes. When one dike fills, I move the water to the next and so on, until the field is covered.

About mid-June, we start looking for that perfect weather window to kick off haying. We start cutting down the hay with the swather, then cut as much in one day as the baler can bale up. In a “normal” year, the hay will be ready to bale 3 or 4 days after the swather cuts. We venture out early in the morning, at about 5:30 a.m. and rake two windrows together ahead of the baler; that tactic doubles the amount of hay we can bale within one morning.

Haying relies on several steps going right: good moisture in the spring, equipment not breaking down, and just the right weather window, which Montanans know is risky business. In 2019, Mother Nature during haying season has been less than cooperative. One of our neighbors described her as “an erratic ‘ole heifer.” The description seems fitting.

Our own haying season plays out like a story that never ends. Everything started off great — good spring moisture and good irrigation, followed by nice warm weather and great stands of alfalfa. My husband, Levi, started cutting hay on June 24.

Then, it rained, and rained again and again.

Another neighbor said, “Lord knows we won’t complain about the rain. We’ll hay in August!” But it was too late for us, as we already had hay down getting rained on. When it rains on the windrows of hay, the hay must sit longer to dry out or it will become moldy. No one wants to make or feed bad hay. So, we waited patiently for it to dry out as rain struck nearly every night for over a week. We finally decided the hay was ready, but with another storm on the way, we needed to get after it. So we did. But wouldn’t you know it: we made it almost halfway across the first field before the baler broke down.

We ordered a replacement part for the baler, then took a two-day family vacation on the 4th of July to celebrate our break from haying. Finally, the part arrived and we fixed the baler. But then the rake broke, slowing our progress. Still, we continued using the baler, but at a slower pace. Then it rained some more. Such are the ups and downs of a typical haying season in Montana.

At the same time, we had to reinstall the pump we use to irrigate two of the hay fields after some earlier maintenance on it last spring. We thought the little chore would take only a morning. But we underestimated. Three days later, after a round trip to Billings, the pump was finally up and running.

Luckily our DNRC Working Lands intern, Kasydi Lucas, helped. She hauled buckets of sediment and gravel from the bottom of the pit where the pump goes.

By now, we cut, baled and stacked about half of the fields. Then we waited out the remaining  rainstorms. One storm brought 60-mile per hour winds, blowing branches all over the hay field. For a fun family activity, we all picked up branches the next morning, post-storm.

Finally, more “normal” weather arrived and Levi again started cutting hay. By this time, the wind and rain storms resulted in alfalfa laying over, making it more difficult to cut. At least the geometrics made prettier patterns in our fields.

Finally, we hit a stretch of warm, dry weather, so we kicked into high gear and cut like crazy. The hay cured for about three days and the baler was fixed and ready to go. Things were looking up. As the summer sun peeked through the few early morning clouds, I welcomed the brisk morning air; although, during the second morning of baling, the breeze made it a bit chilly on the open-air tractor. I pulled the rake around while Levi ran the tractor, pulling the baler. When all goes well, we create about 100 bales in nearly five hours.

But the sense of accomplishment faded quickly. We needed to get the bales off the field and stacked. The quicker we “pick bales,” the quicker we can irrigate again for the second cutting of hay. We moved most of the bales with a flatbed trailer and tractor. With no air conditioning in the truck and the open-cab tractor equally uncomfortable, our job was hot, dust and slow. But moving and stacking the hay are our last steps in the haying process, so that’s something.

After a few more days of baling and several more days of stacking, we finished the first cutting. Since my mom started keeping track of the first and last days of haying over 15 years ago, 2019 will go on record as our second-longest haying season. As we wrapped it up, admired our neat hay stacks and took stock, we felt like the squirrel who stores enough nuts for the winter. Finally, we finish with a sense of accomplishment and preparedness, no matter what 2020 may bring. 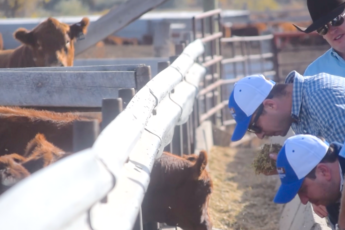