History has been preserved. The Northern Cheyenne empower their youth with lessons of the past. President Killsback speaking to the crowd

Many people often say that they would take a bullet for their family.

Luckily, nowadays few people are put in the position where they have to put their money where their mouth is. But, 142 years ago, a girl galloped through a downpour of bullets in order to save her brother.

Buffalo Calf Road Woman saw her brother’s horse shot during the Battle of the Rosebud, known to the Northern Cheyenne as the battle “Where the Girl Saved Her Brother.” Knowing that he was an easy target for the scouts and soldiers, she jumped on a horse and rode through the battlefield. He jumped onto the horse with her and, together, they road through whizzing bullets to safety.

“A sister, a woman warrior, was willing to go to save her brother in the middle of a battle,” Jace Killsback, President of the Northern Cheyenne Nation, told the crowd on the rainy Sunday morning this spring.

Many Northern Cheyenne gathered at Rosebud Battlefield State Park to revisit the battlefield, and its history, in order to inspire their kids’ future.

Tony Prairibear spoke to how Buffalo Calf Road Woman was loved by her family, confident. 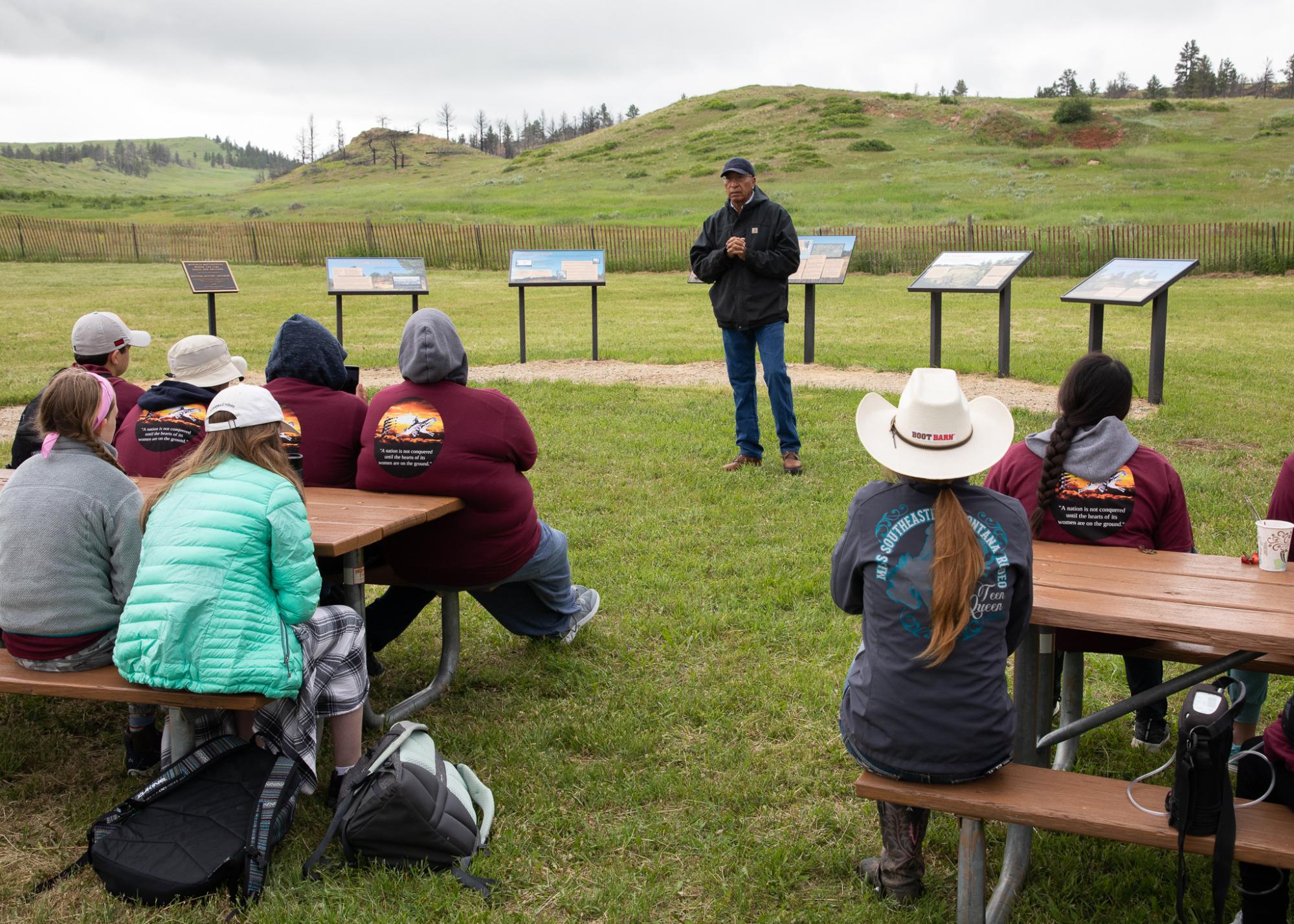 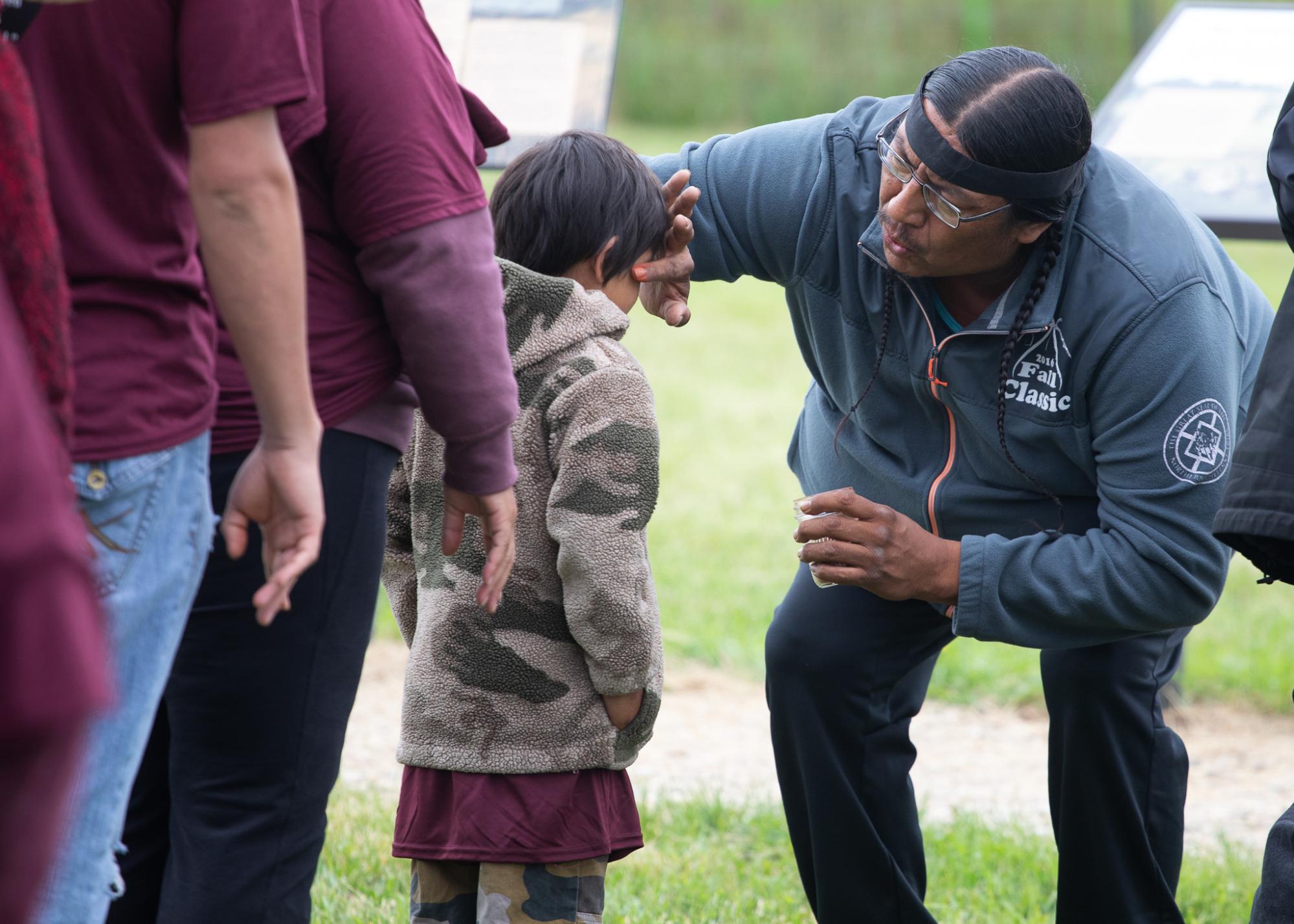 A young boy gets painted with red paint, traditional to the Northern Cheyenne

“She knew she could do it,” Tony said about her saving her brother. Now, he wanted the young Northern Cheyenne to know they can go on to do just as amazing things, “I have faith in you, I have hope in you.” A young boy participates in the drumming circle 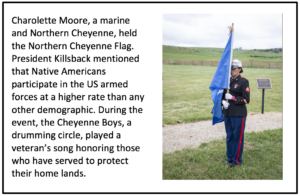 He told the kids at the anniversary event that they have the courage and ability to go and get their education. Then, they can come back and help their community.

The event centered around a historical event that occurred almost a century and a half ago. But the take away was the inspiration that the battle, and the battlefield, provide their young people now.

“It’s important to teach our youth, especially our young ladies, that they can do anything,” said Teanna Limpy, Director of the Northern Cheyenne Tribal Historic Preservation Office, who organized much of the event.

Rosebud Battlefield State Park would not have become a national historic landmark. And without that protection, the land would not look as similar as it does to 142 years ago. Both the Montana State Parks and Northern Cheyenne people are working hard to keep the Rosebud Battlefield state recognized so the story of Buffalo Calf Road Woman can be shared with other Montanans and others.

The event concluded with the Northern Cheyenne’s sacred hat keeper blessing the young people before they went on a run, the majority of which were young women. 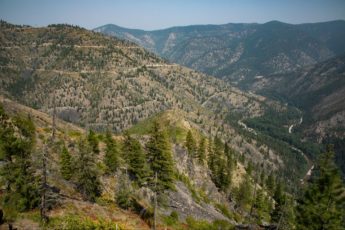 Skijoring Flies and Crashes Through Montana (With Video)

« Previous post
Happy 4th of July, Montana!
Next post »
Jack Creek: Bringing Together Jacks and Janes of all Trades