Farmers and ranchers throughout Paradise Valley rely on the Yellowstone River. Companies move to Livingston because of the quality of life that the river and the mountains provide for their employees. And of course, there are the outfitters and guides who make a living directly from the river.

The river is the foundation of Park County’s economy. It provides the opportunity to prosper-the chance for people to make and to live the life they want.

The Upper Yellowstone attracts people from all over the world, and they bring a stream of money with them. In 2014, according to an op-ed by a senior director at fishing-supply giant Simms, Park County saw $196 million in non-resident tourism revenues. Fishing brings in $70 million per year into Park County. In 2016, 40 percent of all people who came to fish in Montana fished in Park County (page 62, Mountain Outlaw).

One year ago, folks along the Yellowstone got a taste of what life would be like without the river. Tens of thousands of fish died over the course of a few weeks. Much of the Upper Yellowstone River was shut down to recreation, and Park County lost an estimated $524,000.

Here’s the timeline of that month back in 2016, just to refresh your memory.

Record low river flows and extremely high water temperatures were the perfect storm. A microscopic parasite was able to spread, and it killed devastating amounts of whitefish, as well as some rainbow trout and Yellowstone cutthroat.

“The magnitude of the kill is unlike anything our fish health specialists have seen,” FWP said in a statement.

While the river closed, communities along the Upper Yellowstone suffered. Gov. Bullock declared a State of Emergency, and $15.4 million in emergency funds was provided to people whose livelihoods were affected by the closure. As the governor said,

“A threat to the health of Montana’s fish populations is a threat to Montana’s entire outdoor economy and the tens of thousands of jobs it sustains.”

So how are things looking now? Certainly, nerves are high as folks are left wondering if the same tragedy will strike again. In Idaho, they’re still fighting the same parasite after it first appeared in 2012 (www.bozemandailychronicle.com).

Fortunately, river conditions are better this year than last. If you compare the data to last August, you see that the Yellowstone’s flow is higher this year, even though the temperature is still pretty warm.

It is clear that Park County’s economy and people’s livelihoods ebb and flow with the health of the river. Folks in Livingston and Paradise Valley are working together to protect the river that supports them. More than 300 local businesses came together to join the Yellowstone Gateway Business Coalition. They have stood their ground against two mining proposals in Paradise Valley, uniting in the idea that the potential impacts of those mines could be devastating for their businesses and way of life.

This past April, a group of concerned citizens, ranchers and farmers, business owners, and local government agencies met together for the Yellowstone River Symposium. They discussed issues such as drought management and mitigation, water temperature swings, balancing the different user groups, and the overall ecological health of the river. They published their final report and findings here, and they’ve formed a working group to address these issues in the future. 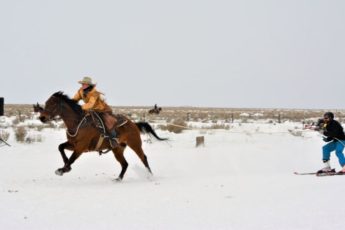 « Previous post
It Takes a Fair to Raise a Montanan
Next post »
Open Space Bond ‘Shouldn’t be an Us vs.Them Issue’