On a recent Sunday, more than three dozen folks of all ages gathered to float the Upper Stillwater. It was a beautiful day filled with good company, Montana sunshine, and spotted knapweed.

Yes, you read that correctly. Knapweed.

This wasn’t just any old float. This was the annual River Float and Weed Pull, hosted by the Stillwater Valley Watershed Council. Rather than carrying fishing poles and lugging a cooler of Bud Light, participants donned work gloves and toted giant trash bags, which they filled with weeds as they pulled the invasive plants from the riverbed.

Folks launching at the upper stretch of the Stillwater River Float and Weed Pull. Photo by Bud Chenault Photography.

This tradition began nearly 20 years ago, when Noel Keogh, a Nye-area rancher, and a handful of folks from the Stillwater Weed District offered to pay the local wrestling club $1 for every pound of knapweed that the wrestlers pulled from the banks of the Stillwater. They collected more than one ton of spotted knapweed that day, which far exceeded anyone’s expectations (or budget!). The Watershed Council made it an official, annual event in 2005, and has hosted the community gathering ever since.

The kind and amount may vary, but weeds are a pervasive problem for communities throughout the state. In the Stillwater Valley, spotted knapweed is the major culprit.

Knapweed hitchhiked to the area in the mid-1900s, most likely on mining equipment from Butte, Deerlodge, and Missoula. Despite some ranchers’ early warnings of the pretty purple flowers, the plant did what weeds to best: they quickly spread along rivers and roads.

When weeds get out of hand, the land becomes unlivable and unusable. Wildlife won’t inhabit the area, farmers and ranchers can’t hay, graze, or farm, and property values decline. To ensure their land and their way of life remain viable, communities along the Stillwater are fighting back.

The Watershed Council has a lot of tools in its arsenal for combating weeds, but the annual Float and Pull is one for the books. This year’s float had the largest turnout yet. The Sibanya-Stillwater Mine donated the gloves, garbage bags, and lunch. The local county weed coordinator came out for the day. And young members of Future Farmers of America and the local 4-H club joined the effort.

“Since we got the youth involved, they make it fun,” said Lindsey Clark, the coordinator of the Stillwater Valley Watershed Council. “There are a lot of teachable moments.”

Clark and her team have been working to engage kids in caring for the watershed, and the Float and Pull is the perfect opportunity. This year, the Watershed Council made a financial donation to every youth organization that participated.

Volunteers pull knapweed from the banks of the Stillwater River and load the weeds into trash bags. Photo by Bud Chenault Photography.

All of these efforts are clearly making a difference.

“Everyone who’s been doing it for years commented on how little [knapweed] they saw,” said Clark.

This year, despite it being a wet spring, participants only filled a handful of garbage bags. That’s a big shift from the haul pulled by the wrestling team nearly two decades ago.

But just because the riverbed seems under control, doesn’t mean this community can slow down any time soon. In fact, Clark and her team hope to ramp up the Float and Pull over the next few years.

“Weeds don’t go away. You can make a dent in them, but they’re always going to be there,” explained Clark. “We want to keep it at a controllable level.”

“We want our farmers and ranchers to be viable into the future,” she continued.

Right now, the annual Float and Pull focuses on the Upper Stillwater, from the mine down to the Moraine Fishing Access. Unfortunately, the reach below the upper section remains overrun by knapweed, leafy spurge, and thistle. Expanding the Float and Pull to those lower stretches will mean crossing a few bridges (metaphorical bridges that is).

First, the Watershed Council needs to secure the support and buy-in of landowners along the Lower Stillwater. Then, they would need to spray all of the weeds along that lower stretch to stage an effective weed pull. And then, they would have to work out some minor logistics around navigating a stretch of the river that is filled with huge boulders. But, Clark remains optimistic the community will find a way to get the job done.

Hopefully, as the Watershed Council continues its efforts to combat weeds along the Stillwater, creative community efforts like the Float and Pull will spread to other areas of Montana. Fingers crossed, those ideas spread faster than the weeds themselves.

Featured Image and all images of the River Float and Weed Pull are by Bud Chenault. Visit Bud Chenault Photography at budchenault.com or on his Facebook page. 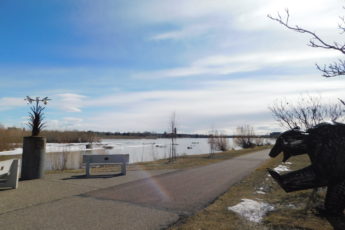