CAPITOL CORNER: THIS WEEK AT THE LEGISLATURE

All sessions have big ticket items, and the 66th Montana Legislature is about to take up the biggest ticket on the table: Medicaid Expansion. Friday and Saturday will deal in competing bill hearings.

The hearing will be long, tearful, and emotional and tense at times. We encourage people to watch video hearings as they post online so you can make a decision for yourself. It seems most healthcare groups support Caferro’s bill, while a few prefer Rep. Buttrey’s. Gov. Steve Bullock said he prefers Caferro’s version.

Medicare Expansion is sorely needed — and we at Prairie Populist remain hopeful that the Legislature can set aside partisan bickering long enough to pass a bill that works for Montanans  and helps keep our most vulnerable citizens covered so they don’t end up bankrupt or homeless because they had a major medical emergency that forces them to use up retirement savings or go into deep debt.

House Bill 2, the Budget Bill, is working its way through the Appropriations committee. It includes a lot of cuts to the Department of Health & Human Services, General Government, and the Department of Commerce. The budget is the only constitutionally mandated piece of legislation that must pass, according to the Montana State Constitution. It still has a very long way to go this session before it reaches the governor’s office. Bullock has expressed deep concern with the cuts to DPHHS and the detrimental effects it could have on the elderly and children.

Senate Bill 24, the optional light motor vehicle fee increase bill, is headed to the House Fish, Wildlife and Parks Committee. The bill increases the optional light motor vehicle fee from $6 to $9 per registered vehicle. If passed, the fee would pump an additional $2 million into the parks division’s budget per year and help pay for not only our parks, but also fishing access sites and create a new grant program for trails.

After traveling a long road in the Senate, SB24 blasted from committee, transferred to Senate Finance and Claims and then finally passed the Senate on a wide bipartisan vote of 33-16. Prairie Populist has covered this bill, so we will continue to watch and report as it continues its journey through the session.

Senate Bill 160, the Firefighter Health and Safety bill, has a hearing in House Business and Labor after passing the Senate. We’re pulling hard for this bill, as our first responders deserve the best of the best, and this bill is a way to help provide for those who put their lives on the line day in and day out. We’ll continue our coverage the bill moves through the House. We are hopeful it will emerge from committee and sail through the House.

As always, there are a lot of “cats and dog” bills moving their way through the session. They deal with smaller issues and smaller money items that must eventually be reconciled with the budget once it’s all said and done. To date, the Legislature has introduced 1,105 bills this session. We expect more to be introduced as people rush to get their pet bills into the pipeline before revenue transmittal of April 1st.

The mood of the legislature post-transmittal is less convivial that we’d think, especially since the session is over half-way complete. Tempers are short, all players are tired and bills are dying left and right. That’s not always a bad thing, but a legislature should attempt to maintain decorum and professionalism as various role-players — legislators, lobbyists and others — interact. Hopefully, a good weekend’s rest will bring back some of that decorum. 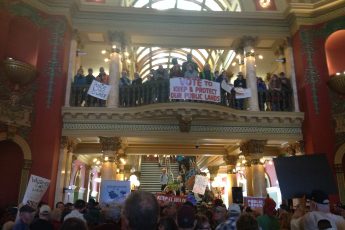