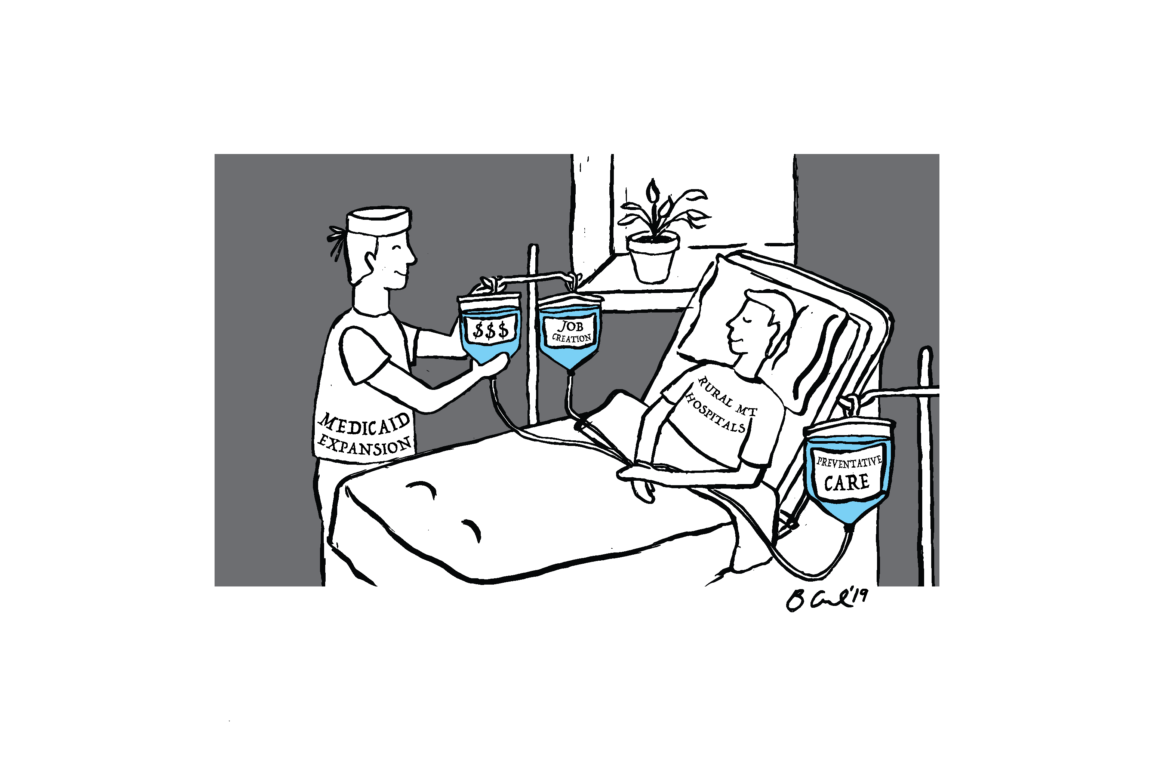 Repost of an article originally run on February 25, 2019. Cartoon by Bridget Creel. Written by Amanda Garant.

Lately, every newspaper, radio station and local TV broadcast has been talking about Medicaid expansion. It’s the talk of the town, and rightfully so.

Even though the details around the future of Medicaid expansion are a bit fuzzy right now, for the most part both Democrats and Republicans want to see the program continue in some capacity. And why wouldn’t they? According to the slew of reports and articles from the past few months, Montanans are now healthier and safer, private businesses benefit from expansion, and the state and taxpayers save money.

We at Prairie Populist visited with rural hospitals and medical professionals to get their take on the current state of Medicaid expansion in their communities.

The Sidney Health Center’s board of trustees recently submitted a letter to our state legislators, urging them to support Medicaid expansion because the people in their community are getting the care they need.

“Our plea is that they repeal the sunset on it,” said Jen Doty, the CEO of Sidney Health Center, in an interview with the Sidney Herald. “We want a healthy community. That’s our mission.”

“Because of the expansion, people have access to health care and are using it. It has improved and enhanced access,” Doty continued. “We want to improve access to all people.”

Communities across the state show similar numbers to Richland County’s. Currently,  95,000 Montanans have coverage for everything from diabetes prevention and hearing aids to substance abuse treatment. Survey after survey shows that Montanans feel healthier. About 15 percent of Medicaid beneficiaries would likely have had some form of private insurance in the absence of expansion, according to an April, 2018 economic study by the Bureau of Business and Economic Research at the University of Montana. Those without insurance would likely have gone without coverage for early screenings or treatments.

Hospitals across Montana share Sidney Health Center’s support for Medicaid expansion. They want the folks in their communities — their neighbors, their business owners, their friends — to be healthy. But that desire isn’t just a feel-good mission statement stemming from the goodness of their heart; rather, rural healthcare providers want a healthy community because it’s better for their bottom line. And ultimately, what’s better for their bottom line may be better for all of us.

In 2015, before the state adopted Medicaid expansion, Kirk Bodlovic, the CFO of Providence Western Montana, said in a Missoulian editorial that preventative care is a better use of healthcare dollars because it cuts down on avoidable, expensive hospital visits. He also touted the financial benefits hospitals will experience with more insured patients.

“It is anticipated that with fewer unpaid costs thanks to Medicaid expansion, hospitals, health care systems and providers can invest in resources to help coordinate care for patients,” Bodlovic said. “That will be a win-win situation for patients, hospitals, and taxpayers alike.”

Now, three and a half years later, are there fewer unpaid costs thanks to Medicaid expansion? Have hospitals and healthcare providers been able to invest in resources to improve care for patients?

It’s hard to speak generally about every hospital in every community across the state. Some facilities have clinics, while some don’t; some offer certain preventative screenings, while others do not. Every town is unique. Different populations have their own issues and needs, and patients’ financial situations are often dependent upon outside forces, like the annual price of commodities or the amount of seasonal rainfall.

Rob Brandt, the chief executive officer of Mountainview Medical Center in White Sulphur Springs, told the Montana Standard that his facility’s charity care was down about 34 percent in 2016. And while Mountainview hasn’t experienced a large revenue increase, the facility has seen a spike in preventative care, which could eventually pay off when fewer people visit the emergency room.

Northern Rockies Medical Center in Cut Bank serves the county with the highest population of Medicaid expansion enrollees in the state. Cherie Taylor, the CEO of Northern Rockies, said the number of patients who do not have insurance or who have a balance due even after insurance has paid decreased between 2015 and 2018. Conversely, the number of patients on Medicaid increased during that same time period, meaning the facility received more payments for the services provided.

So did Northern Rockies make more money? Yes and no.

Northern Rockies struggled financially during the first year of Medicaid expansion. The medical center had an increase in business, but it lost nearly $500,000 for a variety of reasons.

In 2017, after the program matured, Northern Rockies Medical Center started to see the positive impact from Medicaid expansion, including a 60-percent drop in bad debt from 2016 to 2017.

Just because bad debt decreases and revenue increases doesn’t mean that Montana’s rural hospitals are swimming in piles of money. For rural hospitals, breaking even — or as close to even as possible — is a more realistic target.

“We don’t have a profitability on operations,” Taylor said. Ultimately, Medicaid expansion helped Northern Rockies Medical Center. As Taylor said it was “a very crucial component” to its operations.

Northern Rockies Medical Center has 80 employees and offers a range of services, including physical therapy, x-rays and MRI scans, visiting specialty clinics, and a 20-bed critical access hospital. Medicaid expansion gave the center a little more breathing room with its budget, enabling it to expand services to include a mobile MRI unit and mammography equipment.

“When we were just struggling so much financially, adding service lines just wasn’t a realistic goal,” Taylor explains. Now, many patients depend upon the expanded services.

If the Montana Legislature doesn’t find a way to continue Medicaid expansion, it would be hard for Northern Rockies to continue to offer those expensive services. Folks would have to travel to Great Falls or Kalispell, both over 100 miles away from Cut Bank, for those life-saving screenings, forcing transportation problems for many patients.

“I’m really afraid what impact that would have on our community,” Taylor lamented.

Beartooth Billings Clinic In Red Lodge also sees Medicaid expansion as a form of cost control for its facility. In 2018, the clinic provided $6.8 million in uncompensated care, which is the care given to uninsured patients who are unable or unwilling to pay.

“Medicaid expansion offers some reimbursement, but it does not cover all costs. However, it does help our patients receive increased access to important and life-saving preventive care and screenings,” said Kelley Evans, CEO for Beartooth Billings Clinic in an October editorial in the Billings Gazette.

“We don’t necessarily contribute all of that to Medicaid expansion,” Aldrich said. “It’s difficult to parse out.” For example, he explained that the center is dependent upon the health of the local economy: “When agriculture is doing good, we seem to have better payers.”

With the decrease in bad debt and charity care and increase in revenue, Central Montana Medical Center has been creative and proactive with the extra money.

“You can replace some equipment that you’ve been wanting to replace or needing to replace,” said Aldrich. For example, the center can offer other services or increase staff wages.

According to the Montana Healthcare Foundation, Medicaid helped make health care the number one driver of private sector income and the second largest source of jobs in Montana. Between 2015 and 2017, Montana health care sector added over 6,200 jobs. Between 2016 and 2017, healthcare wages grew by 12 percent, which beats the state average of a 7-percent increase during the same year.

According to a recent article in the Missoulian, Leo Pocha Memorial Clinic in Helena has added nine employees, including administrative staff, clinicians and counselors, and expanded its services due to Medicaid expansion.

Stories like Leo Pocha’s make you wonder: if there wasn’t Medicaid expansion, what would that mean for the nurses and doctors in our rural communities? The Daily Inter Lake editorial team asked the same question in a recent editorial titled, “Could there be even bigger threat for doctor shortage if MedEx canceled?”

The Association of American Medical Colleges estimates the United States could see a deficit of up to 120,000 doctors by 2030, with rural states such as Montana likely to be hardest hit.

While The Daily Inter Lake noted that some doctors and specialists will move to Montana because of our access to the outdoors, not all Montana communities experience the same influx of doctors. Without Medicaid expansion, some rural facilities may not have the money to offer more jobs or competitive wages.

What good is healthcare without hospitals?

States like Montana that expanded Medicaid are six times less likely to close hospitals, according to the Montana Healthcare Foundation. Imagine what would happen if our rural communities lost the hospitals that serve us — the hospitals that catch our cancers and diabetes early, that check on our kids and grandparents, that take care of us when we crash our sled or slide off the road? Their loss would be devastating to Montana residents who live hours away from a main urban hospital in a large Montana city.

Hospital leaders recognize the impact of Medicaid expansion. They don’t want to see it go away, and they’re willing to chip in and help pay the state’s cost in order to keep it around.

If we want our rural communities to grow and be strong, if we want our kids to raise their own families in our small towns, if we want our grandparents to retire in the homes they’ve stewarded their whole lives, then we need to support our rural hospitals. Medicaid expansion, by decreasing the bad debt and charity care and increasing revenue, does just that. It supports and strengthens our rural hospitals. In turn, our hospitals support and strengthen us by expanding their services, offering more jobs and keeping us healthy.