A total of 150 state representatives and senators converged from across Montana to Helena and the state Capitol to pass legislation and do the people’s work. Hundreds more showed up to lobby their elected officials. Both legislators and lobbyists consumed tankers of bourbon, vodka and beer. Typically, Helena’s liquor consumption goes up about 30 percent when the high-energy, stressful Legislature is in session. The sale of Advil and Aleve most likely matched that number, as well. It’s probably not a bad idea to buy some stock in Pepto-Bismol, too, during the every-two-years session.

That’s the common stereotype: that legislators are boozy party animals and less-than-serious about the work necessary to run a state. We don’t often see the legislator who goes back to her apartment or extended-stay hotel room to work on budget issues late into the evening and on weekends. There’s the legislator who drives 100 miles home to cover the night shift at the rural hospital so that their patients have the care they need to heal. There’s also the occasional legislator who must return home to be with family when devastating news hits about the health of a loved one; he or she must choose family emergencies over voting on bills.

That’s the truth about a citizen legislature: lives don’t freeze when our neighbors and friends become legislators. Legislators juggle their families, problems, finances and their pet agendas inside the Capitol. It’s easy for folks not immersed in the intense, sweeping 90-day Legislature to think that Old So-and-So is a jerk who hates a specific issue or person. But the truth is often much more complicated than some taxpayers realize. On the other hand, it’s also worth noting that often less-than-well-behaved constituents pummel legislators with phone calls, letters, emails and visits.

Yet somehow, the work got done — in the chaos of early mornings and late nights, along crowded rows of lobbyists looking for “just a minute or two of your time,” of endless meat-and-cheese trays and bad cocktails served by people whose lives are impacted by the 150 legislators.

After a mere 87 days, Montanans breathed a sigh of relief as the Legislature adjourned and the elected officials headed home to explain what they did and why. Overall, the session was good for Montana. Proof? Many legislators now take credit for votes cast and bills passed.

The all-important state budget, which still represents a legislative priority, passed. Some key programs, such as public preschool, didn’t snag the funding they needed. Our weakest citizens — those most in need — watched as the legislative majority made dramatic cuts to service agencies in order to fulfill campaign promises about “not growing government.”

But there was major progress in other areas. Our representatives reauthorized Medicaid Expansion, secured investments in our public lands and strengthened our agriculture sector. Such successes allowed legislators to return home and talk to neighbors, family and acquaintances whose lives are impacted by their ultra-significant decisions.

To the 150 who sacrificed their time, talents and energy, a grateful populace thanks you. Thanks to the agency staff who work long hours alongside the legislators to ensure decision makers have the best information to make the best decisions. To the lobbyists — both swarthy and earnest — thanks for participating in our democratic institution. May the great state of Montana always be a beacon for inclusiveness and strong, impassioned debate about how our government should work for everyone. 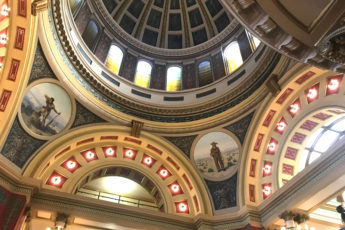