2 Basset Brewery gives you a true taste of Montana

If you’re in White Sulphur Springs, or anywhere in Meagher County, 2 Basset Brewery is a must. Whether you’re looking for a place to watch the game, celebrate after the game or take a load off your bones, 2 Basset Brewery has good beer.

So it’s the obvious place to go.

With trendy micro-breweries popping up faster than weeds in Bozeman and Missoula, 2 Basset was a relief to walk into. Even though technically it’s a brewery, it feels like the local bar (although without the whiskey). While we were there, the game was on the TV, and everyone was talking about how the White Sulphur Springs varsity football team just dominated another game, with the final score being 58 to 6. It feels like the community hub, filled with the good energy that comes with a good drink.

But 2 Basset Brewery hasn’t even celebrated it’s 2nd anniversary yet! Its grand opening was in June 2016 — but it’s doors did open a little earlier than that. Barry and Chris Hedrich, the owners, had become empty nesters. At first, they got two basset hounds to help fill the absence of their two kids, but quickly realized they needed something to do with their extra time.

Barry, having grown up on a farm and ranch, is familiar with hard work, as are many in White Sulphur Springs and the Ringling area. High-quality wheat and barley are also a familiarity in the area.

And what you do get when you combine good wheat, malting barley, hard work, extra time — or at least Montana’s definition of extra time — and Montanan’s demand for beer? 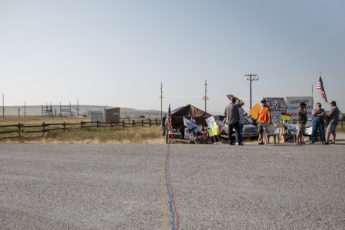