I’ve lived in Montana my entire life, and the first thing from Montana I ever heard mentioned on TV was Butte. It was mispronounced (as “Butt, Montana”), but it still was on television. I was just a young child but I still remember getting so excited that something I knew about, somewhere I had been, was on TV! Waiting for Bob to start our Historical Adventure

Butte’s always captured my attention. In third grade, my teacher required us to write in daily journals. I wrote in mine that the best day of the year was when we went to Butte. As a child, what dominated my memory was the famous geese tragedy of ‘95, and The Auditor, a 17-year-old dog that made his home above the Berkeley Pit (mtstandard.com).

In eighth grade, I took another field trip to Butte. Having grown out of my animal phase, what dominates this memory is realizing that Butte had an Amusement Park, Columbia Gardens, and the mysterious fire that destroyed it a couple months after it closed (mtstandard.com).

While I was obsessing about how there could have been an amusement park in Montana, my friends were paying more attention. One friend, in particular, could not believe that there was an entire underground city in uptown Butte. So, obviously, we went back to Butte a year later for her 15th birthday. Not yet able to drive ourselves, two of our moms drove us over to Butte for the weekend.

This was the trip where I realized how key Butte is to our history. Bob, from Old Butte Historical Adventures, took us below the city, and into the past. When we started in a barber shop, I’ll admit I was underwhelmed. Yes, it was underground. But it’s just a barber shop. What’s so special about that?

The safe. The safe, at the back, was what was special. The birthday girl unlocked it, and then Bob unlocked the second door in the back of the safe. We crept through the false back of the safe, and at the young age of 15, I entered my first bar. It may have been out of business for 100 years, but I still counted it.

The tour continued winding its way through town, and along the way, Bob transported six 15- year-old girls back to the early 1900s. Images of crowded streets, early electric lighting, and good wars being won on Butte copper dominated my thoughts.

Bob locked us up in the same cell as Evel Knievel had been locked in for drunk driving (and our moms hoped it would be the first and only time they’d see us in a drunk tank).

But, of course, the most memorable place was the Rockwood Speakeasy. It had only been discovered seven years earlier, and when it was, there was still whiskey left from the raid that shut it down when Hoover was making his presidential bid. 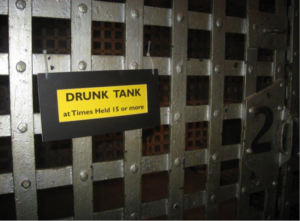 Throughout high school, I kept returning to Butte. When I took the Trolley Tour, the guide had no hesitation in telling me that my then-crush lost his virginity at the Dumas Brothel. Luckily, I knew it had shut down in the ’80s, and as neither of us was born by then, the claim was impossible.

That same year, I was relieved to find that the Berkeley Pit now had “high-tech” devices to scare away birds that may try to land on the lake. Through my own investigation, I found out that those devices are speakers that blare music so loud anyone would get out of there faster than a bird can take flight! A couple years later, I skipped school — with the same crush — and drove to Butte. Finally 18, I gambled for the first time in the back of the M&M Cigar Store. When my mom found out where I was instead of my last three classes, she was not consoled when I told her, “at least I’m not in the drunk tank”.

Finally, more than six years after my friend’s 15th birthday weekend, three of us returned to Butte for the Folk Fest this summer. When we got off the bus at East Copper Street, our shoes were getting pulled off our feet by the hot tar. And every time we thanked the beer vendors they replied with, “You betcha! Thank you!”.

While trying to find some relief from the sun, we posted ourselves up on the stoop of The Napton. There, we met Dan and Wayne, two brothers who were also trying to fight the heat. While chatting, we found out they manage The Napton and another apartment building.

When I asked Wayne was he most enjoyed about Butte, he didn’t miss a beat, telling me he’d have to be “20 degrees cooler and able to keep both eyes open to answer that question!” 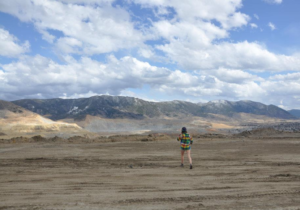 Off to check the “high tech” system at the pit

So it took some coaxing, but eventually, he did give me a little more information. He said the Pit is an obvious classic. He said the Folk Fest, as well as Butte’s many other festivals and celebrations, have been adding more value to the city every year.

Then he started to tell us about how part of the decorative arc at the top of the Napton had fallen off his building during the July 6 earthquake. Luckily, as it is a historical building, it’ll be restored. Wayne was relieved that it had not “squished anyone” and that he would not be the one paying for the repairs.

That’s what he really loved about Butte. The historic buildings, that make up almost every other building in uptown Butte, and the history they represent. Wayne in front of the Napton

Butte copper helped the allies win World War I and World War II. It helped the country light itself up with electricity. In its heyday, before the turn of the century, Butte was producing over 25 percent of the world’s copper, earning its nickname, the Richest Hill on Earth. In the United States, any time you flip on the lights, chances are the wires carrying the electricity are made from Butte copper. (mininghistoryassociation.org).

Every fond memory I have of Butte comes from its old history and its present community. The Berkeley Pit, home of The Auditor, was part of the Anaconda Company’s mighty reign in Butte. Now anytime you walk down the tunnel to the observation pit, you’ll likely have a swarm of children run by you yelling. Looking up at one of Butte’s many historical buildings

Columbia Gardens was the first and only amusement park in Montana. But it was thought of as a gift to the city from the Copper King who built it. All the speakeasies were part of Butte’s thriving economy in the early 1900s, where the rich and fancy went for cocktails, and to bet on horses. It was where the Butte’s wealthy (which were many, in the ’20s) went to swap stories.

Not all of Butte’s history is as glamorous. The Dumas Brothel was the longest operating brothel in the United States. (I won’t discuss the community found at the Dumas). But now, it’s a contributing property to Uptown Butte’s historic district, which is the largest National Historic Landmark District in the nation. The  M&M didn’t close its doors once from its opening in 1890 until 2003 (butteamerica.com, mtstandard.com). This was because Butte was running 24/7! Buttians constantly wanted to go be with their fellow Buttians!  The world was running full speed so Butte was as well.

To the world, Butte was the “Richest Hill on Earth.” But for me, it is also the most important. It’s helped me understand Montana values, like how hard work pays off (especially when you hit copper). I’ve learned that Montana is built on ambition, and that we helped bring the world energy; that we’ve helped front lines win wars. That even if I’m not the same age or have the same background as someone, if they’re in Butte, chances are they’re worth having a beer with.

Butte was a cornerstone to progressing the world forward. There’s no reason Montana can’t do the same again. « Previous post
Welborn Honored by Landowners, Sportsmen
Next post »
We’ve Got What the World Wants: Ag in Montana, Part 1