From the very beginning, Dr. Patrick Carr made it clear he would be adding research on alternative crops to the Central Agricultural Research Center when he was hired as the superintendent.

The keyword here is adding.

Patrick joined the research center with the specific goal of finding alternatives to winter wheat. Most agree that Montanans have that crop figured out fairly well, but many are eager to find out what else can make a profit.

So the center has started to look into warm season crops, like corn and sunflowers.

“They still may have a place, our climate is changing,” Patrick said.

These warm season crops used to be more risky in Montana. Like tomatoes, one late freeze and some warm-season crops, like dry beans, are done. (We suspect a couple people with home gardens may know this all too well right now!)

In addition, the research center has plots for cool season pulses and are looking into cover crops, forage crops and grains.

Tractor practicing minimum till techniques as to not disturb the soil more than needed.

While driving around the plots Patrick began rattling off different crops they had in the ground, and I had to admit to myself that I just could not write down all of them fast enough to keep track.

“My hunch is we’re looking at about thirty different crops,” he said when I pushed him to give me an estimate.

Research on organic farming methods will also begin next year. However, the rumors of the center switching to organic at the expense of conventional farming are not true. Primarily, Patrick has always wanted alternative projects to be additions to the research center.

And, it just wouldn’t be possible to go entirely to organic research. Organic farming takes a lot of resources, including people, and the research center would not have enough for the entire 600 acres to be certified organic.

Nonetheless, Patrick does think that the center will become a big player for organic research. They’re dedicating 25-acres, which isn’t big in terms of commercial but is a lot for research solely on organic crops. This will give the center the ability to do research for the organic community that has previously gone un-done.

Here’s just a snapshot of some of the research plots. There’s a lot going on out there that can benefit Montana’s ag community.

But the research center faces a lot of the same challenges any farm does. They only do dryland farming, so even in wet years, they’re still very dependent on water. And whereas they’ve previously had students lined up wanting a job for the summer, now students who can work full-time at the center during summers are in short supply.

While they’ve got similar problems, Patrick’s attitude is also the same as most farmers. He listed more than seven other researchers working on the many projects at the research center, telling us he’s just part of the team. 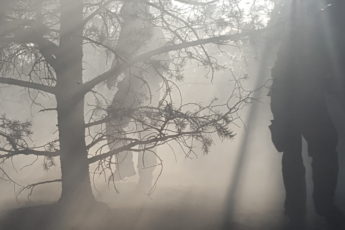 Managing a Swath of Public Lands: Your Voice Matters

« Previous post
Ackley Lake State Park: Future Uncertain for Central Montana’s Little Retreat
Next post »
A Hidden Gem — Lost Creek State Park Has Yet to Be Found by Many