April 4, 2018.  Much of the Musselshell Basin was still under several feet of snow. Photo credit: Levi Morgan, US Partners for Fish and Wildlife.

There are plenty of advantages to living along the riverbank, but it’s not always as idyllic as it seems.  Montanans who reside on the Musselshell River in the central part of the state can attest to that.

“I enjoy living where I do,” says Musselshell River landowner Donna Pedrazzi. “But, it was a rough year.”

“We have had several open winters and we got used to that,” says Pedrazzi. “This year, calves were born in blizzards and we looked forward to spring, but [with the amount of snow] we weren’t sure what was to come.”

On April 1, 2018, snowpack readings in the Musselshell Basin showed the highest levels ever recorded.   Ask anyone in central or eastern Montana about the winter of 2018 and they will give you a sideways grin and tell you, “It was long.”

People who live on a river know that a lot of snow in the winter means a lot of water – and consequently a lot of flooding – the following spring. Pedrazzi and her neighbors along the 340-mile Musselshell River braced for another 2011 – when the river flooded with an intensity residents had never seen before.

In an average year, warm weather arrives suddenly and makes quick work of the snowpack, causing the Musselshell River to rise high and fast and then recede just as quickly. This year, the river began to rise in April, right on schedule. But, then it stayed three times higher than average well into July as it cut new paths, washed away banks, created a deeper and steeper channel on the upper end of the river, and widened the channel on the lower end. The rising water and changing landscape flooded hay fields, destroyed pumpsites and diversion dams, buried pipelines, washed out roads, and threatened to send homes, barns, and corrals floating down the river.

“The water never got as high in 2018 as it did in 2011,” explains Pedrazzi. “But it stayed at flood stage for so long it caused much more damage . . . more bank erosion, more channel deepening, more channel changes.”

“The damage will have long-term ramifications that will be high-dollar recovery efforts,” explains Lynn Rettig, water manager for the Delphia-Melstone Canal Water Users Association, whose members own property along the middle reach of the Musselshell River. “There were lots of folks still recovering from 2011, and events in 2013 and 2014. This will be really hard for some.”

Unpredictable weather added to the trouble. Isolated downpours in late spring and early summer dropped inches of rain in minutes and exacerbated the high flows.

“We dealt with the river from April through July, but we also got those storms in between. There was a hail storm on May 31 that caused flash flooding and a lot of damage,” says Pedrazzi, describing the golf ball-sized hail that pelted hay fields and knocked out vehicle and building windows. This storm dropped three-and-a-half inches of rain in some locations, pushing the Musselshell River up even higher (drone footage of flooding).

“The water would go down enough for us to fix the damages on our canals so that we could use them,” says Rettig. “Just when we thought we had something fixed, we would get one of those downpours and the river would flood again. And then we would have to fix it again.”

Weeks passed and the flows of the Musselshell River remained well above average. Residents watched and waited. As June wore into July, with the river still high and still making changes, landowners began to plan for when the flooding would finally end.  Any work that takes place within a stream bed, such as stabilizing a stream bank or burying a utility line, requires a 310 permit from the local Conservation District office.

In addition to ranching, Donna Pedrazzi also serves as administrator for the Lower Musselshell Conservation District.  On July 2, she summarized what her neighbors were reporting when they called to start the 310 process, “Everyone is amazed at the damage that was done by the river, but the water is still too high to determine what can be done. The few people who have called me say their 310s will be massive projects to try and save barns, sheds, houses and fields. The general things I hear about are things that can’t be fixed, such as whole pastures and fields gone.”

The Natural Resources and Conservation Service (NRCS) works closely with landowners to assist with recovery efforts when possible.

“A lot of what has happened we’re not sure about yet. We know the river moved significantly in some areas, but folks haven’t begun to start the reclamation process yet,” says Austin Shero, District Conservationist for the NRCS Roundup Field Office. “I was told [by landowners] that the river had more lateral movement and bank loss in 2018 than there was in 2011. That speaks volumes to me.”

By the end of July, the river had finally receded enough for people to take stock of the damage – which was enormous.

“We lost about 200 feet of bank where our pumpsite and buried waterline is,” reports Mosby-area landowner Rodney Rowton. “After 2011, we put in a portable pump, so we were able to save the pump, but the site washed away. We tied onto the pipe with a backhoe and were able to save some of the pipe. But, what do we do now?”

Bank erosion on the left side of the above photo shows where a pump site and buried pipeline were completely lost. The below photo shows a different view of the buried line and the bank changes. Photo credits: Musselshell Watershed Coalition. 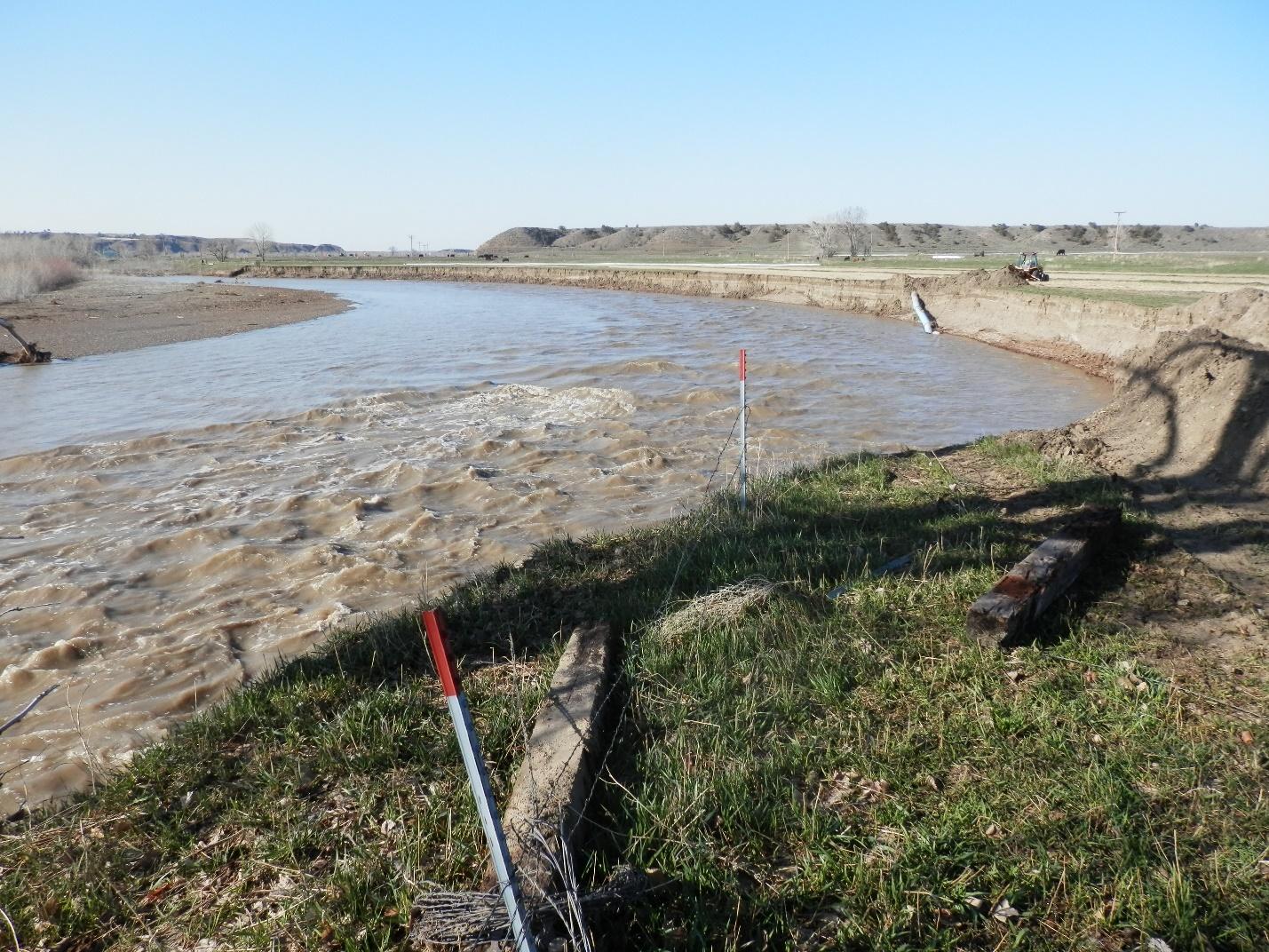 There are some success stories from 2018. When the flooding in 2011 forced the Musselshell River to take a new route that went by the Egge Dam rather than over it, landowners worked with Fish, Wildlife, and Parks (FWP) in a multi-year project to remove the dam. Last year, FWP planted willows at the site to stabilize the riverbanks and restore the area to a more natural river system. Those willows –  and the surrounding riverbanks – survived the most recent flooding.

Flooding evokes two waves of response. First, there is the immediate reaction to rising waters and safety concerns. After the floods of 2011, neighbors, water managers for the irrigation projects, and the Department of Emergency Services (DES) established a chain of communication to notify folks downstream of impending trouble. Today, residents rely on this system to tell them when they need to move equipment and livestock and which roads will be closed. Musselshell County DES also operates a Facebook page to share updates with local residents. The May 31 hailstorm brought 22,000 visits to the site.

Once the water recedes, the second response comes: the recovery effort. The challenge is understanding the difference between a short-term fix that is likely to be flooded out again next year and a long-term solution.

After the 2011 flood, the Kilby Butte Hutterite Colony tried to minimize the risk of future flooding by keeping the river in its old channel and preventing it from creating a new cut-off.

“We worked and worked to keep the river in its old channel and keep it from making a cut-off,” says Joe Stahl, landowner and boss at Kilby Butte Hutterite Colony. “All that work and it didn’t matter . . . This year she cut through just like she wanted anyway.”

As it rerouted the river, the cut-off not only eliminated access to a hay field, but also increased the speed of the water, creating more severe damage further downstream.

Landowners like Stahl know that changes to the river upstream have consequences downstream. That’s why he welcomed the River Assessment Triage Team (R.A.T. Team) - whose job it is to assess the entire area in search of long-term solutions that work for landowners up and down the river.

The R.A.T. Team is charged with addressing the short-term needs of landowners as much as possible while also assessing the big picture. This includes looking at what is happening upstream and downstream and trying to determine what the river might do next.

“In a normal year, if we can’t irrigate, we can’t get a crop,” says Pedrazzi, citing loss of a pump site as an example of something that requires an immediate fix. “We need to get it back into production.”

But 2018 proved that sometimes a wait and see approach might yield stronger long-term results. The R.A.T. Team is working to balance this conundrum by identifying solutions that account for the unpredictability of the river while keeping farms running.

“We need those recommendations as quickly as possible [to begin] working on a solution so that we’re ready before next irrigation season,” explains Pedrazzi, noting that some landowners may need to wait until spring of 2019 to begin their reclamation and recovery projects.

The R.A.T. Team is in the process of compiling its findings and is expected to complete its recommendations sometime in February 2019. The project will feature photos, maps, assessments, and tools to help guide rebuilding and restoration efforts along the Musselshell River. These recommendations will create a template for long-lasting recovery decisions that will apply to communities nestled along rivers throughout the state.

No stranger to the challenges of living along the river, Musselshell River residents are doing what they have done for decades – moving forward. With each disaster, they learn, rebuild, and become more resilient. Thanks to the early alert system put in place after the 2011 floods, landowners have more time to move equipment and cattle away from the stream when it starts rising and county road departments get a headstart in protecting road crossings. And, with insights from the R.A.T. Team, people have a better understanding of how the river functions. Landowners know which stretches of the river are the most vulnerable and are experimenting with different types of bank stabilization techniques, such as the willow lifts used at the Egge Dam.

The one constant in this place of unpredictability is the respect that people have for the Musselshell River. The river gives and it takes away. Those with a true respect for its power are leading the way forward toward a more resilient future.

Do you know of a group working on community-level solutions? Email [email protected] if so!

« Previous post
Seeing the Flathead National Forest Through the Trees
Next post »
Where People are More Spread Out, They’re Coming Closer Together