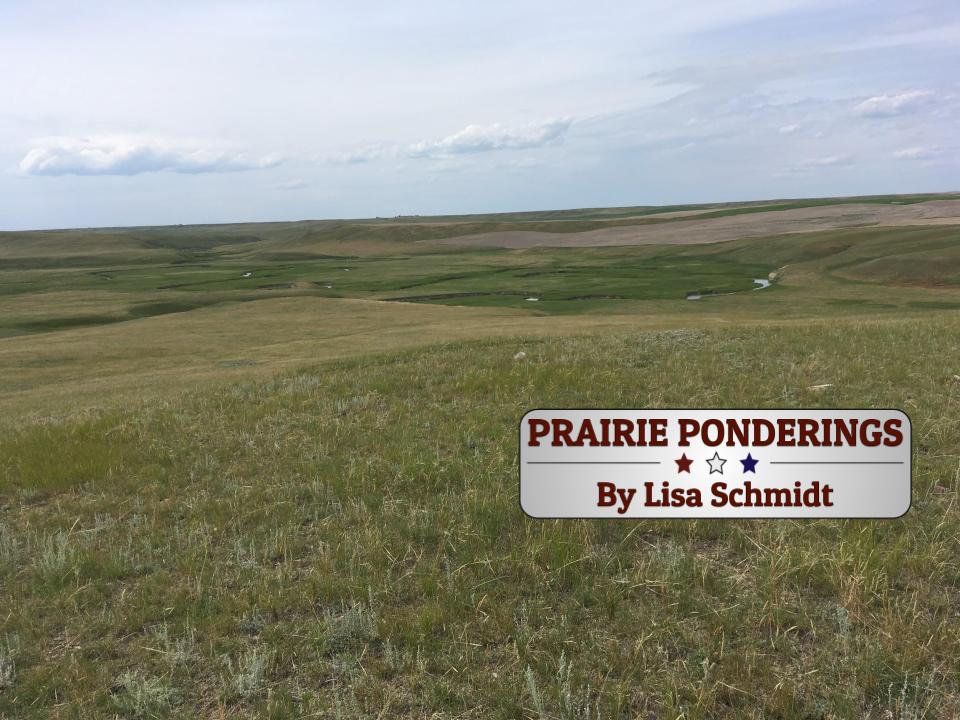 Feature Photo by Lisa Schmidt. The grassy knolls and creek bottom of Schmidt’s newly purchased land won’t change. The land has always offered spectacular habitat for wildlife and cattle alike. The only change will be who maintains the fence and battles weeds.

I just signed the papers to buy more land.

Tears ran down my face as I drove in to town to promise payments until I’m in my 70s — tears of glorious anticipation, tears of happiness and tears of sorrow.

The pasture is a beautiful mix of grassy knolls, bottom land of sub-irrigated meadows, brushy bear country, a strong creek and fences that wash out each spring.

I know I need to watch out for the boggy places where I can’t cross the creek on my horse because I’ve tried. I failed, bailing off my horse as he floundered through the bottomless mud.

I know I should bring insect repellent every single time.

I know access is limited and that limited access makes this place feel wild and remote, even just over the hill from the rest of my ranch.

I know where some of the gravelly crossings offer safe passage. Those same gravelly places allowed passage to the family from whom I purchased this land. They spent summers riding the same grassy knolls, watching deer in the same meadows and splashing in the same creek that their grandfather had purchased years and years ago. They made memories and built their family heritage on that soil.

They shed a few tears on Signing Day, too.

Our bargain has been a long time coming.

My husband, Steve, and I tried to buy this place about 2009 and again about 2015. Both of us held our breath and crossed our fingers until neither attempt worked out.

Instead, we rented the pasture and learned the land. As we rode, we talked about where to put a cross-fence, how to help the upland grass grow, and how a summer-long camp with no cell service, no electricity and no gasoline would renew a person.

Steve loved this place. He loved the challenges of the muddy bogs and the steep slopes and the secrets just around the corner.

Once, he was herding a neighbor’s cow along a narrow, drop-off embankment when she spun around toward him.  There was no room for both of them. Either he was going to roll off that cliff or she was.

He grinned at her and splashed into the creek. He rode over to the fence, opened the gate and she trotted through, content to stay on dry ground.

Another time, Steve and I gathered the cattle in a blinding October snowstorm. I flushed a coyote out of the brush as the cows were trailing along a cut bank, one of the few spots out of the wind. The coyote followed the cows along the cut bank, reluctant to face pelting ice balls just to escape human contact.

My brother, Roger, and a couple of friends helped me gather the cattle last fall. As Roger and I rode through short brush to check around a corner of a steep, chokecherry-filled coulee, count-on-me horses began to dance and prance, refusing to move forward. We spun in circles, spurred and cajoled. They refused. We decided to count the cows we had already gathered instead of awaken a sleeping grizzly. We had all of the cattle – no cow wanted to graze in that danger-filled brush either.

On the anniversary of Steve’s death, I had a long talk with myself. My choice was to wallow in the glory of the past or seek the influence of the past to live deliberately and completely.

So when one of the owners called me last February to say family members were ready to sell and they would like to sell this land to me, I jumped at the opportunity. She suggested I think about it. I didn’t need to.

When Steve died, he left a small pot of money. I would gladly trade that little pot for one of our shared dreams.

The transaction took longer than all of us wanted, but we got it done. We all learned quite a bit about real estate agreements, deeds and loan requirements. We all agreed that every form of learning requires tuition and, often, experiential learning charges the highest rates. Yet we all agreed that learning the details and solving challenges is empowering.

The other day, as I waded barefoot through the creek to fix a water gap in the fence, I watched a mule deer doe choose her steps through the brush. My dog laid on the bank waiting for me. We all breathed in contentment and peace.

Signing Day represented an end of an era, along with new beginnings for the seller family. It marked the beginning of a new adventure for me, albeit an adventure made more familiar and comfortable because of an era gone, but never forgotten.

Lisa Schmidt raises grass-fed beef and lamb at the Graham Ranch near Conrad. She has two children; Will, 21, and Abby, 12. Lisa can be reached at [email protected].