In West Yellowstone, You Work — On Problems and Solutions Big hopes for the future bring this town together

You never know what you’re going to find in West. It depends on the season. And as you can imagine, that makes governing and even nailing down the exact population pretty hard.

The population fluctuations in West come with benefits and drawbacks, which is something any community with a strong tourist economy can attest to.

Chris Burke, the most recent addition to West’s Town Council, told us that the community is fiscally healthy with the resort tax, tourism, and west gate of Yellowstone National Park.

But, he went on to explain, it’s lacking new commercial growth. And you’ll be pretty hard pressed to find a community that doesn’t have an affordable housing issue. West is no exception.

In the last 10 to 12 years, the community has lost almost 10 percent of its citizens between 18 and 45 years of age — their population of lively working age community members.

This reduction in prime working-aged people comes with additional problems for business owners. Pierre, who managed a convenience store with his wife, talked about how once you find a high-spirited young person to work for you, someone else will swipe them out from you with a higher hourly offering. There can be a lot of competition for full time, well-trained employees.

But those who are in West have the work ethic of any Montanan.

“That’s what you do down here, is work,” said Pierre. With that kind of grit, comes a lot of hope.

“I’ve never been more hopeful for West Yellowstone than the last couple months,” Chris reassured us. 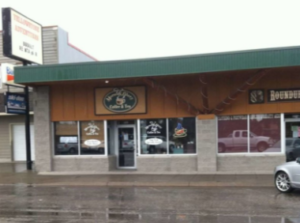 Chris wants to encourage more of a yearlong economy. Chris himself owns Morning Glory Coffee & Tea, which he runs with his family, roasting coffee beans. Thirteen years ago, they were one of three businesses in the town that served espresso. Now, they’re manufacturing perfectly-roasted coffee beans, and outfit a huge portion of the park with their coffee.

Chris wants to find out what it would take to get more manufacturers to come to West. A lot don’t actually need a ton of square footage. But what they do need is good Internet, amenities to support employees and housing.

The Town Council has the chance to kill a couple birds with one stone. Recently, the town purchased 80 acres near the old airport area. After roads, there will be 45 to 50 acres eligible development.

“There’s an opportunity here that nowhere else in the country has,” Chris said about the purchase.

But now, a balance must be struck between what gets built: housing, hotels, restaurants, space for new businesses.

“These things are challenging,” Pierre pointed out. “But if you don’t see the enjoyment in the challenge, you better move on.”

However, West has proven it can come together as a community. Recently, everyone in town worked together in a public-private partnership to get a new daycare center, the Little Rangers Learning Center, off the ground. The town owns the land and put in some money for the building. Many contractors in town stepped up and built it for very low bids.

There was even a special council meeting that was jammed. Pierre described how people stood up at the podium and promised different things. They broke ground the very next day.

“West Yellowstone is a wonderful community, everybody steps up,” Pierre said.

Chris, who wasn’t yet on the Town council applauds this private-public partnership, and is looking forward to all the benefits it’ll provide.

West Yellowstone may be a small town — sometimes. But it has big things going on, and not only during tourist season.

“I think we’re going to come together as a community and do good things,” Chris told us.