With many funding issues for State Parks, Shane Doyle explains why they’re so important

Shane Doyle didn’t want to describe getting funding for Montana’s state parks as a fight.

But when it’s something you love for yourself and children, and people still dismiss you, it becomes a fight.

“I’m not backing down,” Shane said.

Shane, who is a member of the Crow Nation, is a representative on the Parks in Focus Commission. Governor Bullock appointed the Commission to help the Montana Department of Fish, Wildlife, and Parks strengthen the State Parks system. Budgets for and the number of state parks for states in the region. Photo co. Parks in Focus

The Parks in Focus Commission is made up of 12 volunteers, one of which is Shane, and their goal is to provide independent advice to FWP on how to find more revenue streams for State Parks, form new partnerships, and build an engaged constituency.

Shane told us that when you look at other states in our region, it is obvious that Montana State Parks are underfunded.

“We can do as well as Wyoming,” Shane said. Wyoming budgets about half a million dollars per park per year, on average. Montana budgets a quarter of what Wyoming does per park.

Montana is the mecca of Northern Plains Tribes, Shane explained, and that is because of the land.

To Plains Indians, it wasn’t only about beauty. The land in Montana also brought people a wealthy life. Forty-four tribes shared Montana. All could communicate with sign language for trade and sharing information. Everyone knew Plains sign language because everyone was constantly moving around.

“Montana is like no other place in the world,” Shane said. “It’s just incomprehensible.”

Shane has a strong connection to one in particular: Chief Plenty Coups State Park, the log home, sacred spring and farmstead of Chief Plenty Coups, whose bravery, leadership and vision helped bridge the gap between two cultures. Chief Plenty Coups died in 1932 at age 84. When he died, he and his wife, Strikes the Iron, left all 195 acres of their land to the state to become a public park. 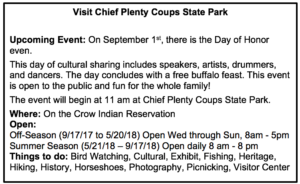 Now, no one can drink from the spring because it is contaminated with bacteria. The previous owner of Chief Plenty Coups’ property kept pigs next to the spring, which could be the source of the contamination.

“That’s not right. We can do better than that,” Shane said.

Shane told us that the best gift we could give to our children is the land in Montana. So he and the Parks in Focus Commission are figuring how to make sure we can protect precious lands like Chief Plenty Coups State Park.

Because as Shane reminds us, it’s something worth fighting for.

“The Governor of Montana established the Montana Parks in Focus Commission by Executive Order on January 12, 2018 as a public-private collaboration to strengthen the state park system and to ensure that the Department of Fish, Wildlife & Parks has the resources, capacity, and expertise to implement the Montana State Parks and Recreation strategic plan.”

The commission will host its next public meeting on September 28th, at Makoshika State Parks. In West Yellowstone, You Work -- On Problems and Solutions

« Previous post
Is that the wind, or do I hear whispers of sales tax again?
Next post »
How to do Something Right.