Can you imagine what it would be like if Montana had a sales tax?

What would life look like if we joined the ranks of California and New York by taxing the things we buy every day? What if we had to pay extra for our kids’ shoes, our home repairs, our vehicles, or maybe even our groceries? 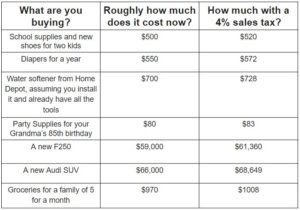 These things add up. And those few dollars here and there cut into our other expenses. Mortgages. Gas. Health care. Maybe a vacation every year or two.

I got to thinking about all this a few weeks ago when I was out shopping for a new welder for some metalwork I do. I was looking at a beautiful Lincoln for about $2,000. The guy next to me at the counter had come down from Canada to buy a Miller.

With a sales tax, which has been in the local news a lot lately, that welder would have cost me another $80. And that doesn’t count the tax on the gas tank, supplies, or steel. And do you think the guy from Canada would’ve made the trip down to shop for his tools here if he wasn’t going to save himself a few American dollars? Probably not.

The media says that only 23 to 25 percent of Montanans support the idea of a sales tax.

Now I typically don’t trust polling as far I can throw it, but what I do trust is that we Montanans have overwhelmingly rejected the idea of a sales tax twice before — in 1971 and in 1993.

So why is there talk of a sales tax again?

What’s shocking is that this chatter is coming from the folks who’ve said again and again that they’re anti-tax. In 2017, our Republican-led Legislature rejected increasing the hotel tax, which was aimed at collecting money from out-of-state tourists. They voted against raising taxes on alcohol, even as broke college students testified that they supported the tax. And they left the Special Session last November bragging they successfully avoided raising taxes on Montanans — even though local taxes had to go up in order to pay for schools whose funding was cut.

Yet in March, Scott Sales, the Republican leader of the State Senate, said on Voices of Montana that he’d support replacing the individual income tax with a sales tax.

Our Montana State Constitution limits any sales tax at just 4 percent and that’s not enough to make up for what’s collected in income tax. So not only would you and I be paying more each day on the things we buy, but our state would have to make more cuts to things like rural infrastructure projects and health services — or we would have to raise other taxes.

This whole thing just feels a bit uncertain. And uncertainty when it comes to money is stressful.

So we checked to see where other folks stood on this subject. Tom McGillvray is running for state senate in Billings.

Tom McGillvray is running for state senate on the northeast side of Billings. McGillvray served in the State House for eight years. He was even the Republican House Majority Leader in 2011. That same year, he proposed a bill to replace the income tax with some sort of sales tax, just like Scott Sales is saying now.

Back in 2011, McGillvray said that he had spoken with folks in his district about the sales tax and that 70 percent or more of them supported his idea. But he also admitted that most Montanas don’t want it.

“[Montanans are] saying no just to say no. We’ve never really deeply considered the idea and the economic benefits,” McGillvray said in a committee meeting in 2011. “And that’s what legislators are supposed to do. We’re supposed to take a stand and lead and not say ‘Well the people don’t want that.’ I’m not saying that the people don’t know what they’re talking about.”

Where does McGillvray stand on taxes now?

“Taxes rates should be broad-based, flat and low, competitive with other states and easy to comply with.”

We asked him what he meant by that — if he thinks there should be a sales tax and if he’d propose one again if elected?

“I don’t plan to carry any tax bills in 2019 if elected.” McGillvary said to us.

What’s missing from that statement, and what would’ve been reassuring to hear, is a blanket response saying, “I do not now nor will I in the future support a state sales tax. Period.”

That’s what many Montanans have been saying again and again. And that’s what we’ll keep saying. It’s just hard to know how McGillvray or anyone else will vote on this in the future. Maybe they’ll listen this time. But I wouldn’t bet my new welder on it.

Got something to say to Prairie Populist? Send news tips, story ideas and comments to[email protected]. If you have something to submit, or an idea for a story you’d like to write for us, check out our Submission Guidelines here. « Previous post
Wind Power is Blowing up Local Economies
Next post »
Montana State Parks: Something Worth Fighting For