Judith Gap was the first Wind Farm in Montana, but its impact continues into the future The train car from “Save The Engine”

You could fit a half-ton full-cab at the top of Judith Gap’s windmills.

The ninety towering structures have made quite the impact on central Montana’s landscape. But, more importantly, they’ve made a bigger impact on the surrounding community.

Mary Beth lives in the Harlowton area with her husband, Tom Bennett, a Wheatland County Commissioner.

The Judith Gap Wind Farm, located 100 miles north of Billings and operating since 2006, had to pay $3.2 million in fees to the county at its beginning. At first, many community members wanted use the money right away. Luckily, Tom Bennett and his fellow county commissioners put the money away and have been using the interest earned from it for over a decade.

And you can see the benefits, even just while driving through Harlowton.

The impact fees paid by Invenergy — the business behind the Judith Gap Farm — have funded an Energy Impact Reserve Account which has distributed $200,000 throughout the community.

Almost half of the money has gone towards benefiting Judith Gap Schools and Harlowton Schools. Other projects have included the Harlowton Kiwanis Club and the “Save the Engine” Committee which worked to restore an old Milwaukee Railroad Car.

The wind farm also provides a second source of income for the Springwater Hutterite Colony. The wind farm leases its land from the colony while still allowing them to farm and ranch around the turbines. The landscape tells the picture, with wind turbines sprouting out of wheat fields and sheep grazing up to the doorstep. Wheat fields with turbines sprouting up

And the Judith Gap Wind Farm has provided 12 of the best paying long term jobs in the county, plus 100 more short term jobs when it was being constructed.

When construction was getting underway, Blattner — the company which did the construction of the wind farm — was in a meeting with the Wheatland County Commissioners.

Tom Bennett mentioned in the meetings that his son needed a job for the summer.

Mary-Beth’s and Tom’s son did work on the construction site at the wind farm that summer, and has now gone on to get his engineering degree at Montana State. Currently he works as a project manager for Dick Anderson Construction’s wind farm projects.

“We want more,” Mary-Beth said about the wind farm.

Judith Gap may have been the first wind farm in Montana but it was nowhere near the last. The wind industry in Montana is blowing up, and bringing local economies with it.

A huge thank you to Michael Prater and Mary-Beth Bennett for showing us around the Judith Gap Wind Farm. They are featured in the cover photo. 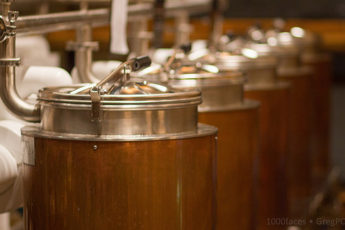 « Previous post
Grizzly Bears… I bet we’ve got your attention now.
Next post »
Is that the wind, or do I hear whispers of sales tax again?