Hey, I think that was my grandpa’s forge! Havre Beneath the Streets- It’s Everyone’s History

On June 14, 1904, a fire broke out in Havre, and four blocks burned to the ground. Stores, businesses, offices — everything was gone. With much of the town decimated, the surrounding ranching community and the economy of the railroad was vulnerable. After all, this was long before the days when we could just drive down to Great Falls to get supplies at Costco or Target.

Rather than abandon their town or put a Band-Aid on their gaping wound, folks came together and found a long-term solution. People didn’t want a quick-fix that would just burn down again. So they opened a brickyard nearby, and slowly rebuilt their town.

In the meantime, Havre’s bustling downtown economy moved beneath the streets.

You can let your imagination go wild, picturing what it would be like to buy groceries, drink some whiskey, or get your laundry done underground. Luckily, we don’t have to rely solely on our imagination. Havre Beneath the Streets, Inc. offers historic tours through some of the tunnels and rooms that were Havre’s “Main Street” 100 years ago.

“People don’t realize what’s really down there till they get down there,” said Christy Owens, the office manager for Havre Beneath the Streets.

If you’re looking for a good time to check out this historical attraction, Saturday June 2 is Havre’s Living History Day. Live actors will be walking amongst the offices, shops, and stores in Havre Beneath the Streets, painting a clear picture of what life would’ve been like underground in the early 1900s.

There’s a replica of a bakery, a meat market, and a dentist office. There’s the remains of an old saloon, a bootlegger’s office, and a brothel. There’s a funeral parlor, a pharmacy, a blacksmith shop. There’s even a replica of a Chinese laundry and an opium den.

Havre Above the Streets
You would never know by looking at it the secrets that lie under the streets of Havre. Many of Havre's downtown brick buildings were built during the early 1900s when the economy moved beneath the streets.
Fire scar from the 1904 Fire
As you descend the stairs to head to the tunnels and rooms below the streets, you can see the burn marks on the bricks from the fire of 1904.
Underground Pathway
Brick arches separate the various rooms which housed different businesses. Here, we're leaving the office of Christopher "Shorty" Young, whose profits from his bootlegging business supported projects around Havre long after he passed.
Pharmacy
This pharmacy set-up came from Livingston. While it may not be original to Havre, it is of the same time period and is similar to what the town would've had in the early 20th Century. A lot of Montana's history is scattered around Havre Beneath the Streets.
Havre Meat Shop
This Meat Shop speaks to the legacy of Havre's Ranching Industry. This shop would've been bustling back in the early 1900s with railroad workers, ranchers, and town folk picking up sausages.
They don't make sausage like they used to...
All the old sausage-making machines are on display.
Chinese Laundry
This replica of a Chinese Laundry has some secrets of its own. But you'll have to go check it out for yourself if you want to learn about them!
The Sporting Eagle Saloon
This saloon had a long life under the streets of Havre. While it is said to have shut down in 1920 during prohibition, it more than likely just re-located deeper and deeper in the maze of tunnels under Havre.
Sporting Eagle Saloon's Bar
Havre Beneath the Streets has the original bar displayed from the Sporting Eagle Saloon. And the mirror above the bar dates back to 1926.
Underground Brothel
All parts of the economy from the early twentieth century moved beneath the streets of Havre. This brothel is said to have remained in business until the 1940's.
Blacksmith Shop
Metal work was a popular, and important, trade in the early twentieth century. Many of the tongs, forges, and hammers in this display were donated by local families from around the Hi-Line.
The Gourley Brothers Bakery
Gourley Brothers Bakery operated underground from 1906 to 1920. The bread oven is built right into the brick wall of the basement, and someone had to keep an eye on it 24-7.

Many of the items on display were donated by local folks, which makes Havre Beneath the Streets very personal for a lot of people. The tour guide can probably tell you whose uncle donated those blacksmith tongs or which farmhouse those chairs came from. For people on the Hi-Line, their family history is in that museum.

But taking a walk through those tunnels and rooms can strike a chord in all Montanans, not just folks from the Hi-Line. It speaks to the resilience and creativity of a community, and the resourcefulness that our state was built upon. Those are the same qualities we rely on today. It’s that determination and love-of-place that allowed the folks in Seeley Lake, Jordan, or modern-day Havre to come together and rebuild their communities after the recent floods and fires.

For out-of-staters passing through on their way to Glacier, Havre Beneath the Streets is a must-see. Located on the railroad halfway between Seattle and the Twin Cities, Havre played a crucial role in western expansion and the American economy, which makes this town a part of every American’s history. The tour is run out of the local railroad museum, which houses memorabilia from around the country.

“It’s amazing. People meet here from all over the world,” Owens said. “It’s kind of a little gem.”

“It’s something unique that no one else has,” said Jody Olson of the Havre Chamber of Commerce. People can come to see Havre Beneath the Streets, and stay for all the other amazing things Havre has to offer, she said.

As the mantra on the Hi-Line goes, Havre has it. And as you’ll see from Havre Beneath the Streets, Havre had it, too. And if folks on the Hi-Line have anything to say about it, their town will keep on having it for years to come. 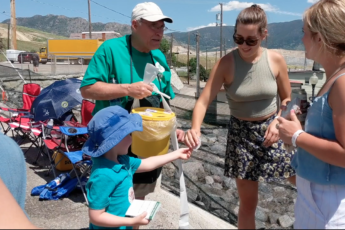 « Previous post
Houses Can Grow Back After Fire. Lives Cannot.
Next post »
Craig’s Caddis Fest Kicks off Summer in Montana