The Ruby Valley: A Place of Harmony Between Ranchers and Wilderness (Part 2) 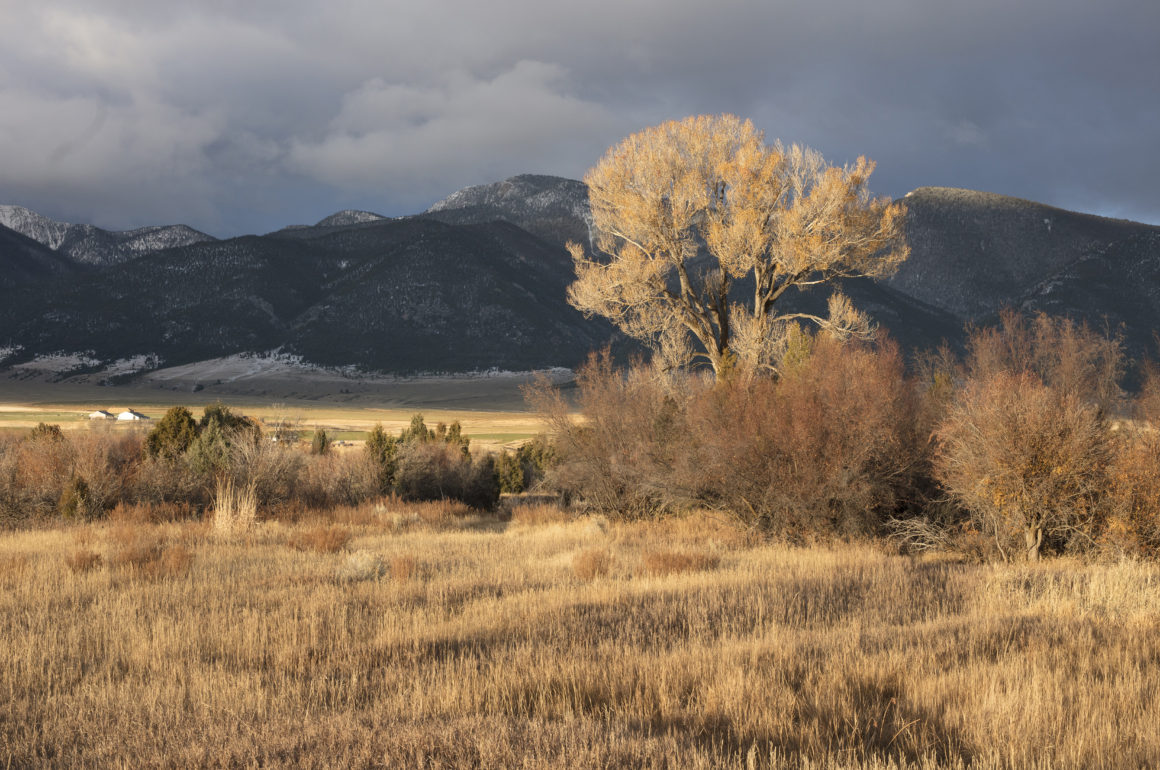 Story and Photos by August Schield

Meet Rick Sandru and Neil Barnosky, two ranchers who take great pride in their occupation, and in their role in the Ruby Valley Strategic Alliance.

Having grown up with a receptive eye for the land, Rick and Neil are part of a larger ranching culture that depends on the health of local wild lands and open working spaces.

“Keeping the working ranches intact and viable is the best way to achieve all of our long term conservation goals,” said Rick. Open working ranches provide many with subsistence, and maintaining them is something all Montanans can get behind.

Rick’s ranch sits in the northern reaches of the valley in the lowlands of the Tobacco Root Mountains. The Jefferson River, a descendant of the Ruby, flows through his property. Today, his ranch is operated by his hard work, alongside his two boys and a few other ranch hands.

Rick supports wildlife throughout his property. A receding oxbow of the Jefferson is kept open to provide irrigation water and to maintain a healthy fishery. Deer and elk roam freely, feeding off the same alfalfa provided for the cattle. Pheasants flutter about wherever the grass grows tall, and from time to time, a large bull moose can be seen emerging from the willows of Parrot Creek.

Rick’s favorite view of his land. The Tobacco Roots rise up in the background.

When looking out on what is now Rick’s favorite view, it’s hard to imagine that this land used to be a dump site, full of old structures and trash. An original soil test came back very unpromising. But after some initial irrigation and tillage, Rick began seeding with a cover crop, a cocktail of plants consisting of peas, oats, barley, turnips, and radishes — the kind with long tap roots that bore deep holes into the soil, allowing water to efficiently percolate. Not too long after, it was transformed into a productive hay field.

Sustainable ranching is common practice in this valley. No-till seeders are used during planting season. Pastures are attentively rotated, and occasionally grazed by other selective foragers like goats. Cattle are pregnancy-tested and vaccinated every year after coming down from the high country along the Upper Ruby, where Rick and Neil share some grazing leases with a handful of other ranchers.

This community treats public lands like they are their own ranches. Good stewardship acts — like clearing riparian zones of noxious weeds, which otherwise would be spread down river — are funded and enacted by the ranchers.

Neil’s ranch is nestled in the lowlands of the Ruby Range. His family has been here for generations, and he too has children and grandchildren willing to carry on the practice.

I was invited down to assist on Neil’s ranch for a day. On this particular day, he was preg-testing the last of his cattle before the winter season. It’s a process that is very intimate for a rancher because he gets to ensure that each cow is in good health, and extra care is taken for the ones in need.

Around his ranch is a wonderful landscape. Neil, like Rick, also supports wildlife across his property. Deer hunting in this area is a particularly popular activity, and Neil allows many hunters on his property through the Block Management System while making sure some of the best hunting grounds are saved for his grandchildren.

Neil spoke tenderly about his surroundings, and his love for his family could be felt during their conversations. He finds a value in watching the calm waters of the Ruby, and he’s had some of his most memorable experiences while riding with other ranchers in his community during roundup.

This land was inherited in good health and it was brought up by a good honest people. Ranchers like Neil are stewarding the land for the future, making sure their culture is a tradition that will carry on.

Rick and Neil take a diligent approach to conservation. This lifestyle is important to their families, and to the greater community.

“People here are very involved in the community and have children that want to carry on,” said Rick. “So they’re willing to put in the extra work to ensure that that transition takes place and their ancestors have a future here.”

Unlike many urbanizing landscapes in the west, the Ruby Valley has mostly avoided subdivisions and other amenity trends. One way to preserve open working spaces is through conservation easements that are scattered throughout the valley.

Neil’s property supports a wetland easement that provides clean water and waterfowl habitat. It will forever be a preserved piece of his land, and Neil takes pride in that.

“I enjoy what we do everyday. You work on something your whole life, and you don’t quit, you know?” said Neil. “I am glad I do not have the kind of job where you just retire and walk off.”

Our conversation while walking his land made quite an impact on me. The relationships I build through landscapes come from hikes, climbs, and ski descents. Although these are short-lived, they are a part of me. Ranchers often do not enjoy the luxury of outdoor recreation to the same extent that many people around Bozeman and Missoula do. Instead, recreation is built into their everyday life, and it comes from their pure love and care for the land they live with.

Folks like Rick and Neil think on a longer timeline. They share their conservation knowledge with their larger community, and their experience in this country has given them a set of skills that every conservationist can learn from.

To read more about the conservation efforts being done in the Ruby Valley, read the first half of our two-part series: