Verizon Not Getting the Signal (Update: Montanans Get Through!)

Some customers roaming too much, company says.

(Update Sept. 22): Verizon has reversed its decision to terminate these Montana contracts, Sen. Jon Tester announced Friday morning. Thanks to everyone who pitched in to hold Verizon accountable!

“These customers live outside of areas where Verizon operates our own network and many of these lines use a substantial amount of data while roaming on other providers’ networks,” a Verizon representative told Prairie Populist in an email. “The roaming costs generated by these lines exceed what these consumers pay us each month.”

So, “roaming costs.” Unfortunately, if there’s one thing Montanans do a lot of, it’s roaming.

Verizon says 919 customers — with 2,035 lines altogether — got the notices that they will no longer get service after October 17, giving them time to find a new provider.

But as the Great Falls Tribune pointed out, getting a plan with unlimited data may not be that easy.

And as anyone who’s loaded a few apps on their phone knows, it’s hard to control your data usage. Scan the news every few minutes for updates on Montana fires, or check out the vacation videos your cousin posted on Facebook, and you can run though a lot of gigabytes.

Folks in eastern Montana are already worried about weak harvests, blackened rangeland and overheated schools. The last thing they should have to worry about is the fine-print in their phone contracts.

We suppose Verizon can make the argument that as a business, they have the right to cut off customers who aren’t worth the cost. But wireless companies are not normal businesses. They’re licensed by the Federal Communications Commission to use the airwaves without interference from others. And taxpayers have already granted or loaned wireless companies millions of dollars specifically to improve service in rural areas.

Put another way, wireless service isn’t just a convenience in Montana. In some areas, it’s a lifeline. For folks who spend a lot of time in the fields, on the range, in the oilfields or in their vehicles, it’s almost impossible to conduct business, keep track of family and do day-to-day chores without wireless service.

Maybe the most bizarre part of this whole fiasco is that these 919 customers — whether they add to Verizon’s profit or soak it with roaming costs — amount to barely a rounding error for the multi-billion-dollar corporation. Instead of finding a simple solution to help long-time customers, the company is now facing bipartisan wrath both Montana’s U.S. Senators.

Some middle-manager at Verizon is going to get yelled at over this.

So while it’s great that Jon Tester and Steve Daines agree on this one, we hope the story doesn’t end with tough words. This is a chance for both Senators to promote policies at the federal level that will ensure that rural consumers don’t get screwed over yet again by a giant corporation.

Montanans work hard for low pay to produce the things that the whole country needs every day. Verizon likes to brag about its extensive, near-nationwide coverage. But take a look at its national coverage map, and you’ll blank spots scattered across Montana. No, we don’t necessarily want coverage in the Bob Marshall Wilderness or in Yellowstone’s backcountry. But where Americans live and work, it seems like Verizon could find a way to complete its coverage, or at least share in the cost of letting other providers pick up the slack.

We should all appreciate the miracle of technology and innovation we carry in our pockets. But we’re also frustrated by high costs, tricky contracts and indifferent customer service. This is a chance for Verizon to step up and do the right thing, and Montana will be paying attention — as long as we have access to the news on our phones, anyway. 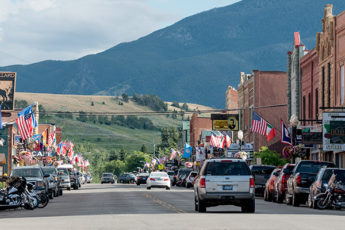